Getting ready to roll

Well what can I say? It's been a great start to my independent venture. Thank you to all of those people who have helped me along the way so far.
The last few weeks have been a bit of a blur to say the least. Things have been very busy with plenty of requests for equipment coming in. People from the UK and from many other countries have contacted me with their bespoke requests, and to be honest it has all taken me a bit by surprise. In my mind I had hoped to reach this stage after a couple of years and that was only if I remained solvent. After only a few months it looks like I will have to expand things already and buy some new equipment to help me with the orders and some of the very intricate designs that people keep asking me to do for them. A band saw and a new planer/thicknesser are definitely at the top of my list. As is a bigger workshop which is sort of becoming a priority and a new van of some description as my car was a little unwell after the journey to and from the Falconers Fair in Yorkshire.

I`ve had a lot of fun over the last three months, have learnt so much more about wood turning , about glue, leather, exotic hardwoods, steel, and so many other things including how not to do your accounts . Its hard work for sure, but if you are passionate about what you do its not so tough.

I have some new equipment designs on the way which hopefully will include some leather and stone top blocks. A traditional Ring Perch should also be available soon. Bags are still in the pipeline as is a few variations on some of the items I already produce involving various metals. One day I would like to put real gold bands onto a lure stick, that’s only when I can afford to make a mistake, which I often do when I make them. 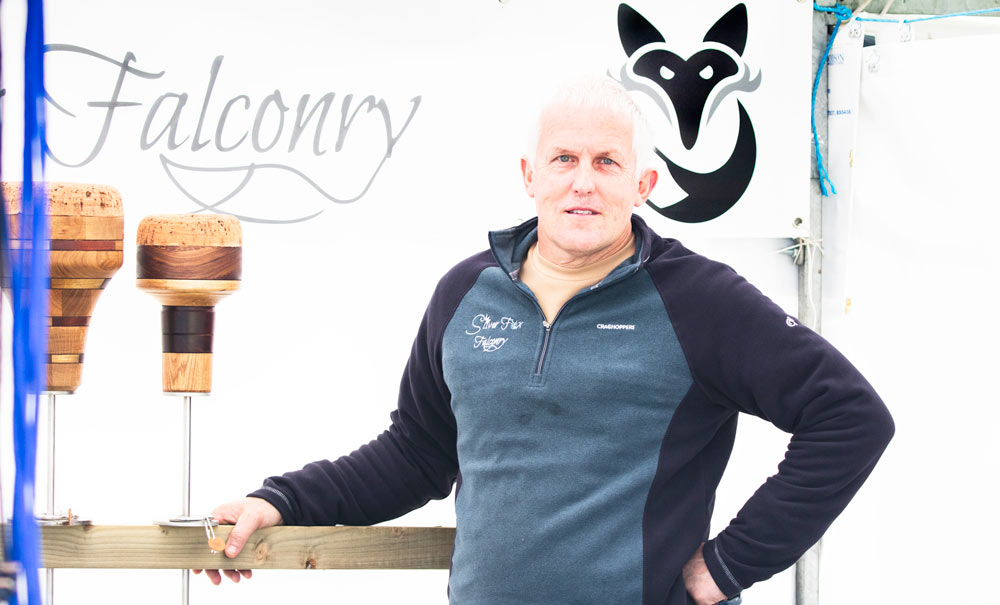 Before I close up I just wanted to mention the Falconers Fair which I attended along with my good friend Kevin Parker. We had a great time, met so many lovely people, the atmosphere was fabulous, weather good and some really great demos. I wonder if all the visitors appreciate all the hard work that goes into these events, from the organisers, NCBP staff, right down to the volunteers. It was a great weekend and all those involved should be very proud that they put together a fabulous event.
Mark Parker - Silver Fox Falconry

Getting ready to roll